Not as Good a Long Day 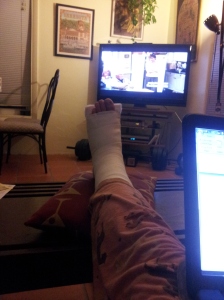 Started out a standard Sunday: Up at 10 for Wait Wait Don’t Tell Me and Radiolab, leftover pizza and coffee. Settled in with some Fandemonium and laundry.

Game had started well enough; got an assist. But not long after that, I was rushing to the back boards to get a puck that had been dumped in. Just before I got there, I turned in anticipation of (hopefully) snatching the puck clean and pulling it behind the net.

Instead, I lost an edge and in a blink went feet-first into the boards.

Feet-first always looks bad—it’s not an unusual source of hockey injuries—but I’ve done it a hundred times without incident, usually because I have time to position myself and/or bend my knees to absorb the impact. But this happened so fast. I saw a flash of light and for a brief moment thought, “Oh, this is one of those things that just looks bad.”

But within moments, the pain crept in, leaving me scooting forward on my hands and knees, and then knees and elbows, head on the ice.

Two guys—one from each team—helped me to the bench, one skate gliding, the other hanging.

There on the little recessed goalie bench, in a shaky daze of adrenaline, I took off my helmet. And there was a roach in it.

Apparently in times of sweaty, adrenalized semi-consciousness, bugs haunt me. It’s like they’re my incapacitated spirit animals or something.

Seriously—and this is the only time I will ever say this—but I couldn’t give a damn about the roach. The pain was preoccupying. Then after a few minutes I started pouring sweat and feeling nauseous. I wasn’t ever aware of an imminent fainting (although I’m not sure you ever see that coming without following through), but I figured I might have to throw up on someone’s backup stick, because I couldn’t fathom moving beyond leaning forward, and even throwing up on my pants didn’t seem to be something I should care about at the moment.

It was halfway through the first; a full period and a half went by before I could pay attention to the game. I’d left the team with eight skaters, and even as they scurried around me exhausted, I couldn’t even contemplate what was going on on the ice. I wanted to, but nothing existed beyond my lower left leg.

But that was the worst of it. After the game, with lots of hopping and scooting and help from my friends, me and my stuff got sorted out and stuffed in my car. Mrs. Harrible accompanied me to the ER, where Ma and Krazy Kevin eventually joined us. The docs gave me drugs and a splint and crutches and a diagnosis: broken fibula. 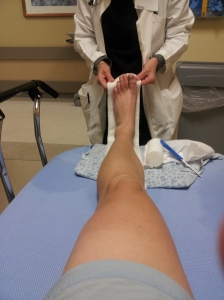 The PA prepares my splint.

So that’s that. After post-hospital dinner and a trip to CVS (yay pharmacy drive-through), I didn’t get home until 10. It took me five minutes to make it from car to door—my gear stayed put—and simply walking from here to there is now an awkward, painful spasm of hops, stumbles and crutches akimbo that leaves me panting and sweaty. My right leg is already exhausted. Every little task is some combination of baffling and grueling: feeding the cat; getting my water glass from the kitchen to the couch. I haven’t yet figured out an approach to bathing that would be sufficient for hockey stink. 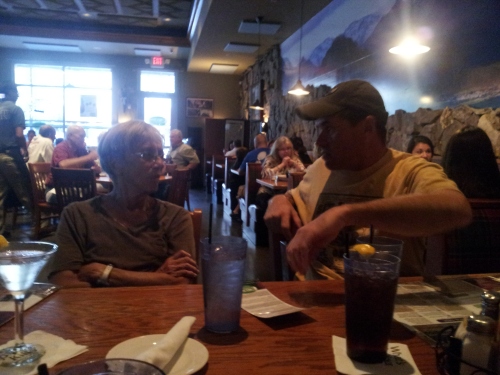 Still. Intense physical pain has a way of singeing off neuroses; hydrocodone amplifies that effect. So thanks to those two, I’ve mostly been basking in the loveliness of friends and acquaintances alike—feeling sincerely appreciative of the attention, instead of the guilt and embarrassment I’d expect to feel:

I’d gladly give my left leg for experiences like that.

Weird week. Weird weird week. Seven days of “vacation” wherein my biggest accomplishment was stuffing fake snow under the coffee table. A one-day work “week,” and even that’s too long, considering I’m now done with what I had to do and, y’know, writing this blog.

(And what did I have to do? Why, I wrote seven different blurbs all about romantic restaurants. Hey! Fuck you, February issue! Fuck you, magazine lag time! Fuck you, [radio edit] and your stupid story about chocolate mousse cake and princess-cut diamonds! If you need me, I’ll be in the bathroom, dusting the Cheetos crumbs out of my bra.)

Feeling more banana than hammer these days—a bit soft, a bit brown around the stem. Battered and haggard from the constant tug and sting of emotional stuff, which at least does have some moments of not sucking entirely, but suck is definitely the mood of the season. It’s like having a nightmare about drowning, waking up relieved and then actually forgetting to wear pants to work.

So I’m trying not to dwell on my emotional pantslessness and thinking instead about…what? Bagels. Bourbon. My Shakespearean insult magnet poetry and how I’d now like to call my band “Prodigal Codpiece.”

Of course, I have to be in the office until they let me leave. People say that’s a good distraction, but it’s really not, because I just sit and bounce between IE windows compulsively refreshing my email and Facebook, halfheartedly checking the Bradenton Herald website, then bouncing back. Refresh. Refresh refresh refresh.

“Charges dropped in Holmes Beach panties theft case.” Well, at least it was the charges and not the panties. (*rimshot*)

Trying to figure out where to meet Little J for dinner tonight. How does Bahi Hut sound? Pineapple and maraschino cherries count as food.

I initially typed “cheeries” and couldn’t figure out why it was wrong. Stupid fucking cherries all happy and shit. I reject you. I take you out of my mai tai and fling you across the room, so much do I detest your cheerfulness. You are not the fruit I’m looking for.

Banana and pineapple, sitting in a tree, D-R-I-N-K-I-N-G.

Sigh. Can we go home yet?