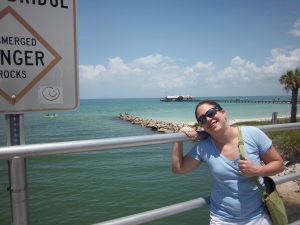 Showing my affection for the AMI City Pier.

And thus I present an analysis of today’s horoscope, based on the fact that I got to leave work early in order to drink a couple beers at one of my favorite places in the world, accomplishing work stuff and even getting quotes in the process, only to have my car sputter and die on the way home, leaving me stranded in a surprisingly questionable neighborhood for AMI, being eaten by mosquitoes and noseeums, waiting an hour for a tow truck and pondering the probable expense and my already skyrocketing credit card bill.

Yes. I don’t really have a choice, but perhaps that’s what you meant.

“It’s essential to focus on building your own self-worth, both financially and psychologically.”

See, here’s where I have a problem. I’m failing to see how I can build my financial self-worth by incurring a horrendous expense. And, frankly, that makes me feel bad, psychologically. Perhaps you’re suggesting that I was on a work excursion, and thus should be compensated for a new transmission? Well, yes, that would make me feel quite clever.

“However, your fires of inspiration may be dying down today as Mars leaves lively Leo to enter efficient Virgo.”

Heh, fucking true story. This happened smack-dab in the middle of the road.

“…but rather a transition into a time when considered actions have more impact than the obvious and noisy ones.”

Did you mean a transmission…? (*rimshot?)

Well, I definitely made some obvious and noisy actions upon going all max-RPMs/no-horsepower on rush-hour Gulf Drive (as did my car)—and yes, those were made to no avail. But, having had time to consider, I…still don’t know what action I should take. I’m-a go look for some tea leaves or a Magic 8-Ball or something. If all else, fails, well…I guess I’ll just see what tomorrow’s horoscope has to say.

Hit some snags, though, too, in quiet moments. Visits from the Ghost of Birthdays Recent Past.

But Friday afternoon was all about a five-hour fried chicken tour of Sarasota, which ended with a couple pints of Cigar City IPA among super-smart people. Gotta feel pretty accomplished when your job involves stuff like that.

What I’ll write about, though, is Wednesday.

Wednesday involved a pretty fantastic trip to McCurdy’s—free tix for me and six friends (with the usual two-drink minimum). An exceptionally well-run business, they regularly give free tickets to people who’ve signed up for their list, which I did, like…eight years ago? Usually it’s eight free tickets, almost always for birthdays and generally another two or three times a year. I rarely take advantage, but it winds up being great motivation to bring a ton of people in there to spend a shit-ton on booze and snacks. I imagine the comics appreciate the full houses, too.

Work friends and hockey friends and friends with whom I’ve generated countless shenanigans: Dinner at Broadway, laughs at McCurdy’s, after-show drinks at Bahi Hut. Dinner was great—introductions and reunions and food; the comic was great—I don’t want to jinx it, but I’ve never, ever had a bad time with a headliner there; Bahi Hut was…exactly what it’s supposed to be: potent and awesome.

Among my most joyous experiences, from childhood on, has been seeing people come together from different parts of my life, and having them enjoy each other. The latter doesn’t always happen, but I feel like, the moments when your friends like your friends…those are the times when your own qualities are multiplied—when you’re liked (or even just tolerated) as a person across a few different planes, and suddenly those planes intersect. And in those moments, all of your different identities—the different persons you become in different places around different people—assemble into a single, liked being.

And you are a social Power Ranger.

That’s actually a pretty self-centered assessment, but whatever: It’s my birthday.

Tagged as dive bars, one of THOSE nights, rainbows and kittens and unicorns

My love of dive bars is well e-documented. As is my love of burgers. So since our nasty-ass clogged kitchen sink forced us out into the world for dinner, I was happy to cross Council’s off my list of must-visit burger joints.

I first heard about Council’s from a Facebook-generated article we put in our December visitor’s guide a year or so ago. Since then it’s come up in conversation a few times, mostly with Beaucha (who, though he’s quite a few years younger, is basically my Bradenton mentor for all the northerly things I missed in my Sarasota-oriented upbringing).

In fact, it’s so much not about appearances that it almost seems like they’re trying too hard to maintain their dive-bar status–from the oddly blocked off front “window” that half-displays/half-masks the old sign, to the unmaintained black bar and its cluttered backdrop of signs and snapshots and decrepit cash registers, to the double-row of pool tables stretching into the back, lit up like an interrogation room by florescent lights.

Well, except for the collective side-eye we got from the crowd when we walked in, led by the portly, ponytailed bartender. (That guy looks like he might be related to the second-generation Bahi Hut bartender who, last I checked, was slinging drinks at Broadway.) Reminded me of the reception we got when we walked into a considerably more frightening bar in BFE East Jesus, Tennessee, where we met a very nice man whose name I can’t quite remember–Trigger? Buckshot? Jackhammer?

Anyway, no menus–the chalkboard above the fridge lists hamburgers, cheeseburgers, chili, chips and beer prices. I ordered a Bud Light and immediately got a half eye-roll from the bartender. “Bottle?” he jabbed, grinding his teeth in the direction of the taps, which were Budweiser and Budweiser. “Um, yeah, please,” I responded, wanting to add, “I don’t give a shit, I ain’t gonna drink that that hangover gravy draught, even if it is cheaper.”

The bar, the beer, the limited food–it’s all very Hi-Way-esque, which certainly works for us so long as we’re not being viewed as interlopers. We ordered a couple of burgers, and the bartender grabbed some patties out of the fridge directly in front of us and took just one step over. This is when I realized that there was no kitchen “in the back”–just a griddle that looked to be about one-foot-by-two-foot.

Ok, that’s one of those tiny details that just encapsulates the awesome character of a place. That, and the sign over the fridge that says, “We’ve been cooking burgers since McDonald’s was just a farm.”

And I’d believe it. A few minutes later, the bartender plopped our burgers in front of us on the bar, half-wrapped in a napkin–no plates or nuthin’–and in one bite I was reminded of Duffy’s. Prooooobably not quite that good, but I’ll give it “Duffy’s East.” Next time I’ll order two, since I could eat the first one in about three bites out of sheer enthusiasm–juicy, meaty, crispy iceberg, chopped onions and tasty bun. (I asked for no tomatoes, but if you want ’em, they sit fresh in a little row on tiny shelves in the tiny window next to the griddle.)

Yep, we’ll be going there again. I’m sure they’ll love us–once they get to know us.

BananaHammer
Create a free website or blog at WordPress.com.